Free Shipping on Orders of $150 or More!

In road transport, an oversize load (or overweight load) is a load that exceeds the standard or ordinary legal size and/or weight limits for a specified portion of road, highway or other transport infrastructure, such as air freight or water freight. There are also load per axle limits. However, a load that exceeds the per-axle limits, but not the overall weight limits, is not considered overweight. Examples of oversize/overweight loads include construction machines (cranes, front loaders, backhoes, etc.), pre-built homes, containers, construction elements (bridge beams, generators, windmill propellers, industrial equipment).

The legal dimensions and weights vary between countries and regions within a country. A vehicle which exceeds the legal dimensions usually requires a special permit which requires extra fees to be paid in order for the oversize/overweight vehicle to legally travel on the roadways. The permit usually specifies a route the load must follow as well as the dates and times during which the load may travel.

In the United States an oversize load is a vehicle and/or load that is wider than 8 ft 6 in (2.59 m). Each individual state has different requirements regarding height and length (most states are 13 ft 6 in/4.11 m tall), and a driver must purchase a permit for each state he/she will be traveling through. In many states, a load must be considered "non-divisible" to qualify for a permit (e.g., an object which cannot be broken down into smaller pieces), although some states allow divisible loads to be granted permits.

Here are a few of our Best Selling Oversize Load products: 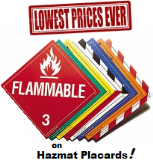 Your Trucking, Warehouse and Shipping Supply Company. Everything Trucking & More!

USA Fleet Supply is a distributor and manufacturer of commercial trucking, transportation safety, training and compliance products. We are the nations largest supplier of shipping supplies, warehouse equipment, mobile electronics, cdl truck driver training products, cargo securement, trucking forms, hazmat placards and much more. Our catalog consists of over 30,000 trucking and transportation related products. If you can't find what you are looking for, contact our Customer Care Team and we'll find it for you.